top page
>
Watch
>
Casio(New product）
New product
CasioCASIO
In 1946, Casio Computer founder Tadao Kashio founded the Kashio Factory in Mitaka, Tokyo. Initially, it was a small subcontracting factory that made parts and gears for microscopes. At the first business show held in Ginza in 1949, we saw an overseas-made "electric computer". From there, we begin to develop an electric computer that processes only electric circuits. Casio Computer Co., Ltd. was founded in June 1957, and Casio decided to move into the watch industry in order to strengthen its earnings base, leaving the top position in the calculator industry. Casio entered the watch business in the 1970s. At that time, the quartz digital clock, which was being switched from mechanical to digital, was a counter that counts the pulses of the crystal oscillator, that is, a simple adder that adds one second to one second. In 1974, Casio launched the first Casio electronic wristwatch, the Casiotron. 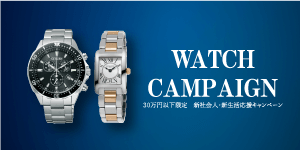